It is well known that all parts and squares of al-Aqsa Mosque are considered as a part of it and they all have the same sanctity and the double of reward as well. The mosque contained a number of roofed musallas and mosques, some of them were built in the early Islamic era, while others were set up as a musalla nowadays for reasons of maintaining and safeguarding al-Aqsa and providing suitable places for worshipers. It can be observed that these musallas are located in three levels, including the general level (ground), and what is below this level (basements), and what is high on a terrace (such as the Dome of the Rock Musalla). The difference in these three levels is because of the nature of the mountain area where al-Aqsa mosque was built. The surface of the area has been settled, which made the difference in the levels of these architectural musallas as solutions.

Note: Some musallas are not used now as a musalla for reasons related to the conversion of their functions.

This section includes 6 musallas in detail, then we will talk about the Dome of the Rock under the domes section, where classified by some references as a dome and by others as a musalla.

Al-Qibly Mosque is the first physical structure ever built by Muslims on Al-Aqsa compound. When Muslims first entered Jerusalem in 15 AH/638 AC the site was deserted and neglected with no signs of construction on it. Caliph Omar bin Al-Khatab and his companions cleared it from debris and dirt and built a simple mosque on its southern part after deliberating the best location for it, as some of the Prophet’s (PBUH) companions suggested building it before the Rock of Ascension to the north facing the Qibla. Nonetheless, the Caliph decided to build the mosque in the heart of Al-Aqsa next to the southern wall instead. The first mosque was a simple building that sat on wooden trusses and was designed to accommodate 3,000 worshipers. However, the mosque that is standing in Al-Aqsa today is not the one that was built by Omar bin Al-Khatab. Al-Qibly Mosque, as we know it today, was first built by the Umayyad Caliph Walid bin Abdul Malek bin Marwan between 90-96 AH/706-714 AC to replace the simple one built by Caliph Omar bin Al-Khatab and his companions. Some narratives say that Caliph Abdul Malik bin Marwan was the one who initiated the mosque’s constructions, but he died before the building was completed and his son AlWalid carried on the mission. During the Umayyad era Al-Qibly Mosque consisted of 15 naves, with the widest being the one in the middle. The building was covered with a brick ceiling and topped with a magnificent dome at the end of the middle nave. The Mosque was renovated for the first time during the Abbasid era by Caliph Abu Jaafar Al-Mansour, and again by Caliph Al-Mahdi after the collapse of its eastern part due to a strong earthquake that hit Jerusalem, while Al-Ma’moun, another Abbasid Caliph rebuilt the central hallway.
Prince Abdullah bin Taher of the Tahriah State (855- 923 AH/1451-1517 AC) later built the corridor leading to the mosque. The Fatimid Caliphs also renovated Al-Qibly Mosque more than once, including the time when Caliph Addahir Li Ezaz Din Allah renovated the mosque in 436 AH/1034 AC. During the Crusaders’ occupation of Jerusalem Al-Qibly Mosque was turned into a church, but when the Ayoubi Caliph Saladin liberated Jerusalem and Al-Aqsa Mosque in 583 AH/1187 AC he ordered the renovation of the building and returned it to its former state. He also brought the magnificent wooden pulpit which Nur Ad-Din Mahmoud Ibn Zinki, a Mamluki king from the Zinki dynasty, had ordered to be made in Aleppo and be placed next to the main mihrab (i.e. niche) in Al-Qibly Mosque. 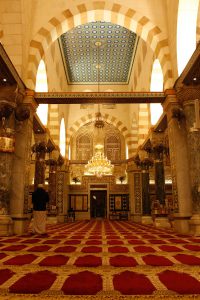 The Ancient Aqsa is located underneath the central nave of Al Qibly Mosque; it is a linear building that extends from north to south. It can be accessed by using an old staircase sitting in front of Al-Qibly Mosque’s exterior corridor which is made of 18 steps. The Ancient Aqsa building ends with another door that is called “The Door of the Prophet” in Arabic literature and “The Double Gate” in English writings. The Mosque is a barrel shaped vault, comprised of three cylindrical arches, that has an inclination towards the south due to the geographical nature of Al-Aqsa Mosque’s location; the interior building consists of two naves that are surrounded by huge stone pillars. It originally served as passage for the Umayyad caliphs connecting their palaces to Al-Aqsa, as the palaces were built next to its southern wall. When the Umayyads restored this building they reused older construction material which could have pertained to the Roman or the Herodian era. However, the Ancient Mosque’s building that was restored and reopened by Al-Aqsa’s Committee for the Reconstruction of Holy Sites in 1998 is an Umayyad building. Today, the building hosts Al-Aqsa Mosque’s library, called “Al-Khutniyah Library.” 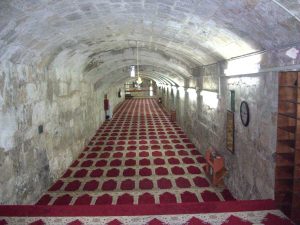 Al-Musalla Al-Marwani or the Eastern Basement is a subterranean massive hall located in the southeastern corner of Al-Aqsa Mosque. Originally a very steep hill, this area was raised through various structures in order to be on the same level of Al-Aqsa Mosque’s northern courtyards, as Muslims wanted to build the Al-Qibly Mosque on strong foundations. Although the accurate year of construction remains unknown, it has been confirmed that the Al-Musalla Al-Marwani was built before the Al-Qibly Mosque. 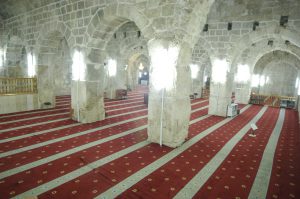 Al-Buraq Mosque is a subterranean barrel vault built next to Al-Buraq Wall (Western Wall). It is called Al-Buraq Mosque because of a ring that is nailed to its wall which Muslims believe Prophet Mohammad (PBUH) used to tie Al-Buraq, a magnificent animal that carried him from Mecca to Jerusalem in the Night Journey of “Al-Isra’ wa Al-Mi’raj.” The main gate of Al-Buraq Mosque is located in Al-Aqsa’s western wall, but is permanently sealed. Yet, the mosque is still open for prayers as worshipers use another entrance located in Al-Aqsa’s western corridor. 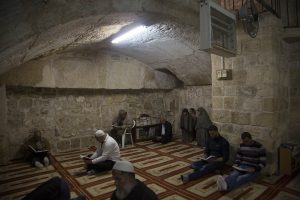 This ancient mosque is located in the southwestern part of Al-Aqsa compound next to the Moroccan Gate (Western Wall). It was built during the 12th or 13th Century AC and pertains to the Ayoubi era; however, the accurate year for its construction and the name of its founder remains unknown. The mosque was dedicated to the followers of the Maliki* School of Jurisprudence in the past, while it is now used as the western hall of the Islamic Museum where a number of Islamic historical pieces and monuments are displayed. 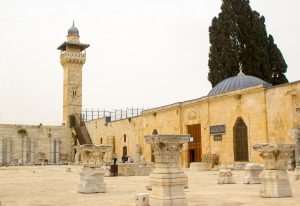 The Women’s Mosque was originally built and used by the Crusaders as a dining room for the Knights Templar; however, when Saladin liberated Jerusalem he turned the building into a mosque for women. The building extends from Al-Aqsa’s western wall to its southwestern corner. During the past three decades the building was divided into three sections:
(1) The southwestern section, used as the southern hall of the Islamic Museum; (2) The central section, used to host the Faculty of Da’wa and Origins of Religion before it moved to Al-Bireh, and then to Abu Dis as part of Al-Quds University, and also served as Al-Aqsa’s main library before it was moved to the Ancient Aqsa Mosque; (3) The eastern section, which is adjacent to Al-Qibly Mosque and used as a warehouse. 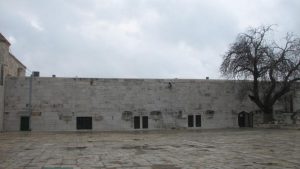 Further description of the Dome of the Rock will be provided in the next section.